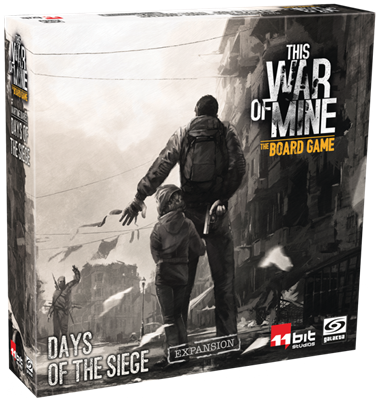 This war of mine days of siege bordspel (ENG)

Days of the Siege is the second expansion for This War of Mine: The Board Game, a story-rich game of survival in a war-torn city.

This expansion includes
- Forlorn Hope, a story-driven 3-act War Campaign featuring: over 750 new scripts; a new board with the Map of Pogoren; a set of completely new rules; over 50 new tokens. Choose your strategy and make dramatic choices affecting the future of the city; learn new rules and face challenges of survival, with your group caught in between Vyseni rebels and Grazni soldiers
- New cards featuring unique content for the War Campaign, as well as new Locations that can be added to the base Location deck to give you more Scavenging options in every playthrough
- Orphans of War module with 2 miniatures, Kid Action cards and Fittings to offer you a unique perspective on the well-being of children in a war-torn city
- 4 Soldier miniatures to use during the War Campaign
- Dog miniature and card so that you may add an animal companion to your group or use the components with dedicated scripts.

Days of the Siege will give you a unique opportunity to experience a truly epic narrative and choose you role in events that are about to change the fate of Pogoren forever.